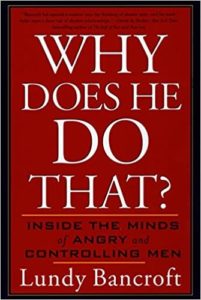 But abuse is more than that.

Psychological, verbal, and emotional abuse may not show up in a picture, but an abuser slowly dismantles your identity in a way that can actually rewire your brain. It’s a deep twisting of what a healthy relationship is intended to be. Rather than being life-giving, an abusive relationship sucks life from you, usually without you knowing.

Lundy Bancroft wrote Why Does He Do That? in 2002, and he draws on 15 years of experience running programs for more than 2000 abusive men. He supports his experience with research, and he frequently tells stories and anecdotes.

Bancroft writes to help everyone, but especially the abused woman, understand the mindset of the abusive man.

What is the Mindset of an Abuser?

An abuser is not easy to identify. He is likely charming, winsome, and well-thought of in the community. After all, he first must romance his spouse and enter into relationship.

Almost all abusers have ‘nice’ periods, even in the cycle of abuse itself. And abuse shouldn’t be reduced to physical violence; it’s much more than that.

Abuse is about power; creating a power imbalance to control or exploit another person. The abuser’s goal is to get you to stop thinking for yourself and silence you.

Bancroft pictures the anatomy of abuse as a tree: the roots are Ownership, the trunk is Entitlement, and the branches are Control. (I’ll remember this with the acronym CEO.)

His sense of ownership leads to a profound disrespect as he treats you as an object. He focuses on his feelings and your behavior, not the other way around. His entitlement leads to justification: he’ll say it’s your fault he’s responding this way. He enjoys the many benefits of the world he has created, and so he deploys tactics to extend his control including lying, blame-shifting, twisting everything into its opposite, isolating you, and gas lighting (or crazy making).

Bancroft lists 10 realities for the abuser:

Not All Abusers are the Same

While abusers share the mentality of Control, Entitlement, and Ownership, their tactics come in many shapes and sizes. Not all abuse looks the same, and no abuser ever ‘looks the part’ as he uses lies and misdirection.

This makes abuse slippery and difficult to pin down.

Often, the one who is abused struggles to identify they are in an abusive relationship because their new normal is distorted—in fact, it’s quite abnormal. They’ve become the frog in the pot ever adjusting to the water beginning to boil around them. Their reality has been twisted and misshapen around the desires of the abuser.

As he puts up facades and hides behind masks, the abuser can be hard to identify.

Here are 10 Styles of Abusive Men Bancroft categorizes from working with over 2000 abusers:

Bancroft starts by debunking 17 myths about abuse in Chapter 2—many of which I believed before reading his book:

And throughout the book, Bancroft answers these 21 main questions:

With the prevalence of abuse in our culture, it is likely that you know someone who has experienced abuse. Why Does He Do That? can be a valuable resource. And if you know someone currently in need of help, here’s a listing for a Shelter and Hotline in Jackson.

For further reading, here’s a reflection on Educated by Tara Westover, a story of overcoming abuse.

[1] In the United States in 2019, more than 10 million people were physically abused by an intimate partner. In their lifetime, 1 in 4 women and 1 in 9 men experience severe intimate partner physical violence. From https://ncadv.org/statistics