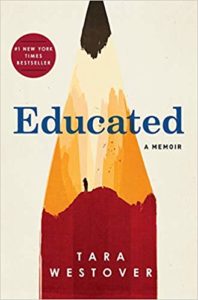 For some, abuse is impossible to imagine. For others, it is a hideous reality. Way too often abuse is ignored. Sometimes it is denied.

Educated is about abuse.

It’s about more than abuse, but certainly not less.

Tara Westover grew up on a mountain in Idaho. She received no formal education. Her father worked in scrap metal and conspiracy theories. The family was prepping for the End of Days, storing self-canned goods, gasoline, and ammunition.

The government was the enemy. The medical establishment wasn’t to be trusted. Wearing modern clothes made you a whore. And it was all fueled by faith. It happened to be the Mormon faith, but just about any faith could be twisted this way.

Their family story was shaped by the belief—instilled by their father—that the government would come after them just as they had for the Weaver family. On a mountain, in isolation, it was “us against the world.” Similarly at church, the father used judgment and criticism to demean others. They are bad; we are good. It was in this toxic hearth that a fierce family loyalty was forged.

From an early age, every one of the seven children, at different times, worked alongside their father in the scrapping business. Time was money, so the pace was hectic, and the father was reckless. But as child after child got injured, they had to get help on their own. He didn’t stop. And no matter how serious the injuries, they wouldn’t go to a hospital—to do so would have been putting their faith in the medical establishment and not in the Lord.

In this space of rigid and unquestioned devotion, abuse festers. It’s physical, emotional, psychological, and multigenerational. Set against the quiet beauty of the mountain, Tara speaks of the hideous power of abuse.

Loyalty. Devotion. Crazy-making. Embarrassment. Denial. Fear. Tara’s words describe what it is to live in a world of abuse. And yet, I can’t remember her ever using the word. She simply tells her story.

While Educated is about abuse, it’s also a story about courage—the great strength it takes to escape the gravitational pull of a system of oppression. Tara is able to write her story because she’s free. Educated is her memoir.