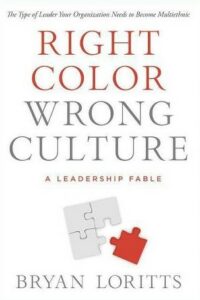 We’re narrative creatures, and sometimes the best way to make a point is by telling a story.

Bryan Loritts calls his book Right Color Wrong Culture a ‘Leadership Fable.’ It’s a fictional account of a Christian school wanting to move out of a ‘transitioning’ neighborhood to a better part of town. They would do a church plant in the better part of town with the school, and the remaining church would work to become multiethnic.

The search is on for a pastor who can lead this newly formed multiethnic church in the transitioning neighborhood.

Peter, a black pastor with experience in multiethnic church planting, is called in to help them figure out who they should hire.

Loritts’s fable centers on Peter’s interaction with the three-person search committee, who all have different assumptions and journeys through the story.

Jackson has never had a close African American friend, and his friendship with Peter becomes the catalyst that helps him see the world from another perspective.

At a baseball game, Peter tells Jackson the story of Jackie Robinson, the first man to break the color barrier in major league baseball. Peter explains that the Owner, Branch Rickey, knew that this would take a particular kind of man—one who could both produce on the field and navigate the culture.

Peter leads the search committee through interviews with three different candidates. He wants to show that the color of someone’s skin doesn’t qualify them for the position, but there is a particular skill set necessary to navigate between different cultures. He develops his categories from Biblical examples.

Peter explains the first two candidates through the paradigm of the TV show The Fresh Prince of Bel-Air. The first candidate who interviews Peter identifies as a C1, the equivalent of Carlton Banks. He belongs to one ethnic group, but has completely assimilated into another ethnic group. Peter explains that the C1 has accommodated so much to the other culture that he will have difficulty relating in his own culture.

The second candidate Peter identifies as a C3, akin to Will Smith. C3s identify in one ethnic group and refuse to assimilate with other ethnic groups or cultures. As such, the C3 won’t thrive in leadership in a multiethnic setting.

The third candidate is tagged a C2—someone who has the unique ability to move between cultures without losing their own identity—and Peter explains him through a comparison to Denzel Washington. Denzel can thrive in both roles—he’s a C3 in Glory and Malcolm X, but a C1 in Flight and The Bone Collector. Someone with this skill set is uniquely equipped to lead in a multiethnic setting.

Of course, it’s not just African Americans who are C1s, C2s, or C3s. White people are too!

Loritts develops robust characters, and Right Color, Wrong Culture is a real page-turner. He uses suspense and humor to drive the plot forward, and the paradigm shift sneaks up on you. In the end, Loritts’s ‘Leadership Fable’ has clearly explained the subtitle of the book: The Type of Leader Your Organization Needs to Become Multiethnic.