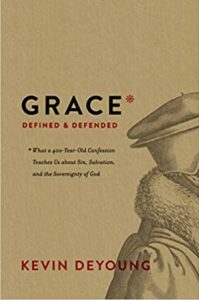 The Canons of Dort were written in 1619 in response to the Remonstrance of 1610. Hey, wake up! Did I lose you?

Sometimes we have a “present bias” where we give more weight to things in our particular period or time and discount things from another era. But Kevin DeYoung wants us to cherish this 400-year-old document because it teaches us amazing things about sin, salvation, and the sovereignty of God.

Ultimately, the Canons of Dort are about the beauty and power of God’s saving grace.

Did you know that the infamous Five Points of Calvinism didn’t come from John Calvin?

Jacob Arminius (1560-1609) studied under Theodore Beza (1519-1605), Calvin’s (1509-1564) successor in Geneva, Switzerland. Arminius was called to pastor a prominent church in Amsterdam, and his theology began to change. A year after Arminius’s death in 1609, some of his followers wrote the Remonstrance of 1610, setting forth ‘The Five Arminian Articles.’

The Reformed tradition (at this point less than 100 years old) had consistently taught that salvation was a monergistic work of God—that is, it was God’s work from beginning to end. Reformed theology says: God saves sinners.

But the Five Arminian Articles taught that salvation was a synergistic work where God and man cooperate together on the work of salvation. Arminian theology says: God makes sinners savable, and then man must choose.

In 1618, the Synod of Dort was called to respond to the Five Arminian Articles, and in 1619 they published the Canons of Dort which contained five main points of doctrine. These five points were first called ‘the Five Points of Calvinism’ in 1913, three hundred years later.

The Five Points of Calvinism are:

Imagine for your 16th birthday, your parents take you down to a car dealership and tell you they’ve purchased a new car for you. All you have to do is pick up the keys and drive it off the lot. That’s a picture of Arminian theology.

Reformed theology, on the other hand, is more like a blood transfusion. You’ve lost so much blood that you’re on the verge of death, and the doctor decides to give you a blood infusion which saves your life.

Here’s the question: does God’s grace actually save you or does it make you savable?

“Whereas Arminianism is shot through with conditionalism—
a conditional election based on foreseen faith,
a conditional application of the atonement based on the exercise of faith,
a conditional conversion based on human willing and receiving—
so Reformed soteriology is unconditional through and through.
In eternity, God freely chose us;
On Calvary, he definitely redeemed us;
And in time, he effectively converts us.
Either divine sovereignty or human decision must be the decisive factor from start to finish.” [1]

It is the grace found in Reformed theology—this sovereign, saving grace—that I find to be to be truly amazing. Because it saved a wretch like me.

Or to say it from the scriptures, let me summarize Eph 2:1-10: We were dead in our trespasses and sins, but God made us alive together with Christ—it is by grace you have been saved!

Salvation God’s work from beginning to end—it’s the free gift of God. And that’s a reason to rejoice. That’s amazing grace!

And that’s what Dort defended.

“At their very heart, the Canons of Dort are about the nature of grace—supernatural, unilateral, sovereign, effecting, redeeming, resurrecting grace, with all of its angularity, all of its offense to human pride, and all of its comfort for the weary soul.
That’s what Dort wanted to settle.
That’s what they were jealous to protect.
Some words are worth the most careful definitions, just as some truths are too precious not to defend.” [2]

[1] Kevin DeYoung, Grace Defined and Defended: What a 400-Year-Old Confession Teaches Us about Sin, Salvation, and the Sovereignty of God (Wheaton, Illinois: Crossway, 2019), 73.