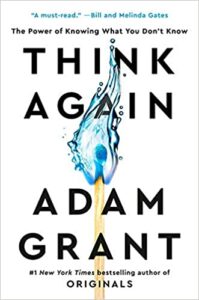 How would that change?

Adam Grant is an organizational psychologist who teaches at the University of Pennsylvania and hosts an excellent podcast entitled WorkLife. His new book, Think Again, caught my attention when movie producer JJ Abrams came on to Adam Grant’s podcast to turn the tables and interview Grant about his book (here’s a link to the episode).

Grant tells the story of Daryl Davis, a black musician, who, one day in 1983, after playing the piano at a country music gig, was approached by an older white man who was surprised that Daryl could play like Jerry Lee Lewis. They sat down for a drink.

The older white man quickly admitted that he’d never had a drink with a black person before, and eventually explained that he was a part of the Ku Klux Klan. Darryl asked, “How can you hate me when you don’t even know me?”

Their conversation started a friendship, which changed both of them. The Klansman left the KKK, and Daryl started sitting down with other white supremacists and convinced many to abandon their hatred.

Grant writes, ‘I wanted to understand how that kind of change happens—how to break overconfidence cycles that are steeped in stereotypes and prejudice about entire groups of people. Strangely enough, my journey started at a baseball game.’

So Adam Grant investigates how to mend the mutual hatred between Red Sox fans and Yankee fans.

He first explores common ground. Both sets of fans love baseball, and there’s evidence that sharing common ground builds bridges. But appealing to the common love of the game didn’t bring them closer together.

Next Grant tries to humanize the other side: get into their lives, show how they care as human beings. This also didn’t work.

What ended up working? Showing them the ‘arbitrariness of their animosity.’ In other words, getting a Yankee fan to realize that if they had been born in Boston, or into a family of Red Sox fans, that they likely would have ended up becoming the very thing that they despise.

But this is just one vignette. There are many more.

Grant explores the joy of being wrong, the psychology of constructive conflict, the role of intellectual humility, the importance of finding common ground in disagreements, how listening motivates people to change, and why building cultures of learning matters. He’s challenging us to Think Again.

I have a certain delight in this book for its general-revelation excellence and insights on being human and how the world works. But as a Christian, I find these ideas echoing one of the phrases of the Reformation: Semper Reformanda, or ‘Always Reforming.’

You see, the reformers knew their theology (and ours too) would always have flaws and errors because we are limited, finite, and sinful beings. And so they wanted to be constantly conforming their understanding back to the Bible. They wanted to be open to what they didn’t know. They wanted to learn, grow, and change. The reformers wanted, and would want us, to think again.