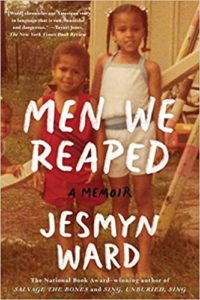 I was first exposed to Jesmyn Ward while sitting under the teaching of Dr. Patrick Alexander and Dr. Otis Pickett (one of our elders). Lecturing in one of the only air conditioned buildings of Mississippi State Penitentiary (Parchmen) as part of the Prison to College Pipeline, Dr. Alexander masterfully unpacked Ward’s memoir Men We Reaped.

One layer of Ward’s storytelling that stands out in bold relief are the places. Growing up torn back-and-forth between coastal Mississippi and New Orleans, Ward brutally describes the joys and sorrows of growing up in a tight-knit community/family while struggling near the poverty line. She also describes the social and cultural juxtaposition of her family and neighborhoods with the elite, majority white private school she was able to attend due to the financial support of her mother’s employer.

But it is death that makes all the poignant layers of storytelling tie together in Men We Reaped. She says,
“From 2000 to 2004, five Black young men I grew up with died, all violently, in seemingly unrelated deaths. The first was my brother, Joshua…second Ronald…third C.J…fourth Demond…the last was Roger in 2004. That’s a brutal list, in its immediacy and its relentlessness, and it’s a list that silences people. It silenced me for a long time.” (7)
She tells the story of these young men backwards, from 2004 to 2000, her memories coming from a younger and younger self. It is powerful and heartbreaking.

Reading Men We Reaped brought up in my heart all kinds of longings for Christ’s return, due to how sin has personally and corporately corrupted so much of this world. In particular, sin and this sinful world greatly affects children, who become adults, who form communities, and who themselves have children. The cycle repeats: grief, strained relationships, poverty, inequality, racism, education, addiction, and violence.

So much of this story I have never experienced, but may it give me new eyes to weep with those who weep (Rom. 12:15), and new feet to stand with Jesus and those He loves. He does not break a bruised reed or snuff out a flickering wick, but brings justice to victory (Matt 12:20).