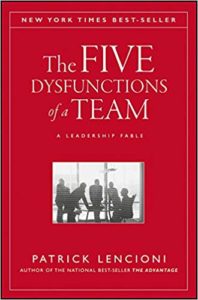 Have you ever been on a team? Maybe you were on a sports team growing up. Maybe you were put on a team by a professor and tasked with doing a group project. Maybe a boss nominated you to serve on a transition team to help the company roll out a new product. Maybe you and your spouse are trying to faithfully parent your children.

It takes a relatively short amount of time to learn that teamwork is both essential and elusive. Enter The Five Dysfunctions of a Team, a fable written by Patrick Lencioni. What comes to mind when you hear the word fable? A short story, involving animals or imaginary creatures, that communicates moral lessons we should ponder? There are certainly no animals or imaginary creatures in this fable. However, Lencioni does use an imaginary company to drive home concrete truths about teamwork. At the end of the fable, the author unveils a model to transform how people on teams relate to one another and their collective work.

Lencioni writes, “Organizations fail to achieve teamwork because they unknowingly fall prey to ﬁve natural but dangerous pitfalls (or dysfunctions).”

After revealing these problems, the author offers wise solutions. Trust can be built through team members learning one another’s stories, personality tests, or 360-degree feedbacks. Conﬂict can become less intimidating when trust is present. When all team members share their own opinions and perspectives, a team can commit to a decision knowing that everyone’s ideas shaped such decision. When a decision has been agreed upon by the team it’s easier to spot behaviors or performance that hurts the team. The presence of trust makes confrontation possible. Last, every decision must have quantiﬁable and speciﬁc results. When this is clearly communicated, it becomes easier to hold people accountable to them.

What teams are you on? This book certainly has the potential to make the dreams of the team work through better team work.