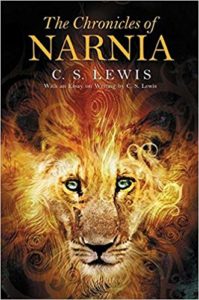 I love the Chronicles of Narnia.

They’ve been called children’s stories, and they are. But they’re so much more.

C.S. Lewis communicates the wealth of the Gospel with childlike simplicity, in a way that breaks our paradigms and penetrates our souls.

I still remember reading The Lion, the Witch, and the Wardrobe for the first time, and hearing the introduction to Aslan. Lucy asks if Aslan is a man. ‘Certainly not. I tell you he is the King of the wood and the son of the Emperor-beyond-the-Sea. Don’t you know who is the King of Beasts? Aslan is a lion—the Lion, the great Lion.’

Mr. Beaver replies, ‘Safe? Don’t you hear what Mrs. Beaver tells you? Who said anything about safe? ‘Course he isn’t safe. But he’s good. He’s the King, I tell you.’

Time after time, Lewis drives biblical truth home in a fresh way. By telling stories, he opens our hearts and imaginations. He creates another world and brings things to life with wonder and awe.

Narnia is filled with complex characters on noble quests. It’s about chivalry and honor and virtue. It’s about good versus evil, both outside us and inside us. But most of all, it’s about Aslan—the Lion, the great Lion.

The Biblical Themes of the Narnian Chronicles
In a letter written late in his life (5 March 1961), Lewis identified the main religious theme of each of the seven Narnian books. It is his account of how ‘the whole series works out.’

The Magician’s Nephew: the creation and how evil entered Narnia

The Lion, the Witch, and the Wardrobe: the crucifixion and resurrection

Prince Caspian: restoration of the true religion after corruption

The Horse and His Boy: the calling and conversion of a heathen

The Voyage of the Dawn Treader: the spiritual life (especially in Reepicheep)

The Silver Chair: the continued war against the powers of darkness

The Last Battle: the coming of the Antichrist (the Ape), the end of the world, and the last judgment

For example, in The Last Battle a Colormene officer named Emeth (which is Hebrew for ‘truth’) has served Tash—the god of the Calormenes—nobly and virtuously all his days. Aslan says to Emeth, ‘Child, all the service though hast done to Tash, I count as service done to me…. Not because he and I are one, but because we are opposites, I take to me the services which thou hast done to him. For I and he are of such different kinds that no service which is vile can be done to me, and none which is not vile can be done to him. Therefore if any man swear by Tash and keep his oath for the oath’s sake, it is by me that he has truly sworn, though he know it not, and it is I who reward him.’

It seems as though Lewis arguing that genuine faith—no matter the object—will be rewarded. But the Bible teaches something quite different. It’s the object of our faith—namely Jesus—and not the strength of our faith that matters.

But despite our occasional disagreements, I return to Lewis’s Narnia frequently. He has given me in Aslan a robust and vibrant picture of our Savior in a way that fills my heart, captures my imagination, and reminds me of the Scriptures.

For that, I am thankful. It makes me love Jesus more, and reminds me what it is to be a child.