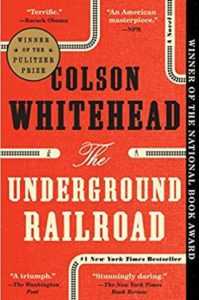 Fiction helps me to enter into another world. As the pages turn, I live in that world.

The world that Colson Whitehead creates in The Underground Railroad is not for the faint of heart. It’s a harsh reality. Though it’s a fictional story, it uncovers a hard truth. A truth that needs to be told.

In my imagination I tend to sanitize what happened on pre-Civil-War plantations in the south. Or worse, I ignore it altogether. I create distance and separation.

Colson peels away the niceties by telling his tale where “stolen bodies work stolen land.” The medium of fiction allows you to enter into the inner world of his characters, and you experience their struggles and joys, heartaches and loves. The details of the story humanize the dehumanization. His characters come to life.

His central character is Cora.

“The first time Caesar approached Cora about running north, she said no,” the story begins. Cora is an enslaved teenager whose mother left her as a small child to run north. As Cora grows up and sees the atrocities of life on her Georgia plantation, she lives in the shadow of her mother’s escape. Her mother is out there somewhere calling her.

Cora’s mother is the only enslaved woman known to have escaped the plantation without being caught. Everyone else has been captured and returned to meet torture and usually death.

This Cora’s story. She flees the Georgia plantation, which becomes a mechanism for the author to take you on a tour of the south. Slavery in South Carolina looks quite different from slavery in Georgia, and so on. Each stop along the way presents different characters and different strands of oppression and degradation. Every time, Cora’s courage finds new expression.

As a passenger on The Underground Railroad, you don’t just hear facts about plantation slavery in the south. You enter into that reality. You experience that truth. And you do it through Cora’s story.

Released in 2016, The Underground Railroad is a #1 New York Times Bestseller. It is a winner of the Pulitzer Prize, the National Book Award, and the Andrew Carnegie Medal of Honor for Excellence in Fiction.