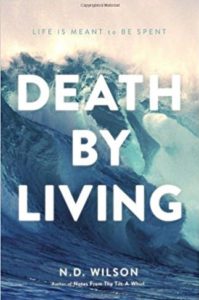 Life is a story.

A good friend recently told me, “I read this every year.” That caught my attention. I picked up Death by Living by ND Wilson, the son of Doug Wilson.

ND Wilson is a story teller, a fiction writer. He was written several children’s trilogies including the 100 Cupboards series, the Ashtown Burials series, and the Outlaws of Time series. He’s also dabbled in parody and Christian apologetics, along with picture books.

Death by Living is ND Wilson’s story. As told by a story teller. It’s not a chronology; it’s a mixture of stops and starts, places and memories, people and episodes. He’s telling a tale. It has a poetic, lyrical feel. Words dance across the page. Pages seem to turn themselves. Sometimes phrases turn so creatively they come alive. You can tell he writes fiction.

“Stories are soul food,” Wilson writes. We are narrative creatures and need narrative nourishment. We crave stories. The stories we hear over and over again shape our stories. “Stories groom instincts, and instincts control loyalties, and loyalties shape choices.” Stories shape our lives.

“Life is a story. We are all characters.” Wilson thinks of life unfolding like a play or a novel. Scene by scene. Act by Act. You are the protagonist in your story, and you have God’s undivided attention. You have God’s attention in the same way that Napoleon or Churchill or Moses or David did. He sees you. He knows your story.

As Wilson tells his story of becoming a writer, he pulls various threads and vignettes together. He tells the story of his grandfather surviving World War II. He weaves a tale of his two-year-old throwing up on an airplane after they landed in Rome. He remembers his family’s feedback as he began to share his stories as a teenager.  He reminds his readers, “we are all sub-creators pirating and rearranging portions of reality.”

Along the way, he sprinkles in captivating theological truths and brings them to life.

Time is elusive. It’s a game clock, counting down, slipping away. The urgency makes now matter. Today counts. Time marks our mortality. And mortality is a grace. Can you imagine being stuck in that one unescapable, besetting sin for the rest of eternity? That would be hell.

Time is also a commodity. We make the past out of the future. Time comes at us, and on the edge of the razor called the present, we create our past. “We are mortals engaged in high-speed creation.”

I don’t know that I’ll read it every year, but Death by Living was a refreshing investment of my time.