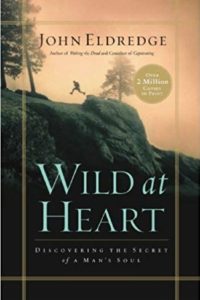 This is a book about men—specifically about the heart of men. It is a powerful book that has spoken to countless readers. It also requires discernment.

We might compare the Christian life is like a plane with two wings—duty and desire. With two balanced wings, the plane flies straight ahead. When one wing is shorter, the plane flies in circles. If a wing falls off, you have a dead tailspin towards the earth.

Eldredge is writing to those who have forgotten desire.

He argues that the heart of a man has been pushed to the margins. Suppressed. Ignored. He asks, What makes you come alive? Too often, he says, we are overwhelmed with duty and following rules and we forget we were designed to live from our affections. To live from our heart.

Living from the heart looks differently for men and women. God doesn’t make generic people; he makes us male and female. The masculine heart and feminine heart, then, are different, and in different ways, reflect the heart of God.

How is the masculine heart unique?

Eldredge argues from the Bible, literature, movies, and psychology that every man has three desires:
(1) a battle to fight,
(2) an adventure to live, and
(3) a beauty to rescue.
These desires are universal because they were built in at creation. Adam is designed to battle the serpent; his adventure is the cultural mandate; his beauty is Eve. This is why so many of our fairytales are about a knight in shining armor who slays the dragon and rescues the beautiful princess.

Men are asking the deep question, Do I have what it takes? That was designed to be answered in the blessing of the father to the son, but all too often, in the absence of the blessing, there is a wound that festers.

These important ideas can be life-giving and can help men discover desire again.

But I found myself arguing with Eldredge multiple times. It was over the way he would handle a biblical text, some theological differences, or a matter of emphasis. I’ll mention three.

Church & Duty
Given the book’s popularity in some Christian circles, it’s striking how little emphasis Eldredge places on the church. When he mentions the church, he generally does so in negative and pejorative ways, caricaturing leaders as a bunch of posers who have missed this essential truth about what it means ‘to be a real man,’ and who, as a result, wind up emasculating men and urging them mainly to be ‘nice guys.’ The church compounds the problem by overwhelming men with duty in a variety of ways that suffocate the life of desire.

Sometimes, I’ll admit, this picture of the church has been more accurate than I’d like. But it’s certainly not how the church is designed. Rightly understood and undertaken, the church is the body and bride of Christ. When the Bible is accurately taught, Christianity and the Gospel clearly center on the life of the heart. The greatest commandment, after all, points to desire: Love the Lord your God with all your heart, soul, mind, and strength.

I see biblical manhood to be deeply connected to the life of the church. When we are united to Christ, we are united to each other (Eph 2), and that is called the church. You can’t be a Christian without it. And biblical manhood cannot be lived out apart from a persistent faithfulness to the duties of work and family—what Eugene Peterson would call a long obedience in the same direction. Omitting the church leaves a gaping hole in Jesus’ model of manhood. After all, the church is the beauty Jesus himself came to rescue.

Projection
Eldredge’s portrait of masculinity sometimes feels too narrow. If you’re not camping in the woods, climbing a mountain, or longing to be a cowboy, you’re not a real man. He generally seems to project what speaks to his own heart onto all men.

I think our adventures are actually much more individualized, diverse, and nuanced than that. Adventure can come to an architect in a grand design, to the writer in a magnum opus, or to the cook in preparing an excellent meal. If you don’t like camping, you can still live from the heart and answer the question, Do I have what it takes?

Theology
Eldredge derives his title, Wild at Heart, from the premise that Adam was created outside the garden, in the wilderness (pp.3-6). And so, he argues, there’s something wild in the heart of man that needs to be in the wilderness on adventure.

But the Bible never says that man was created ‘in the wilderness’; God formed man (Gen 2:7) and put him in the Garden (Gen 2:8). In fact, the wilderness isn’t mentioned until Genesis 14:6, and is usually associated with punishment (see the book of Numbers, which by its Hebrew name is ‘In the wilderness’) and temptation (Jesus, see Matt 4:1-11). Actually, we were made for the Garden—that’s our destiny, to work it and keep it (Gen 2:15). But there’s plenty of adventure in the Garden: naming the animals, subduing the earth, bringing order out of chaos.

His portrait of God living an adventure, taking risks, and hoping to be loved by mankind (pp.30-32) appears to be in contradiction to the sovereign king of the universe who knows the end from the beginning and controls each individual atom. If God is not sovereign, it has been argued, then he is not God. Eldredge’s point—that we were created to take risks and live an adventure—is a good one. But I would ground it in the cultural mandate, bringing order to chaos, and naming the animals (Gen 1-2), rather than a God who risks. It’s Arminianism at best and Open Theism at worst.

Conclusion
Too many men have lost their hearts and ignored their desires. I’ve been there, and Wild at Heart helped me on my journey ten years ago. But as you read it, be discerning. Press into the church. Know the desires of your heart. And, don’t replace the wing of duty with the wing of desire. Your plane needs both in order to fly true.