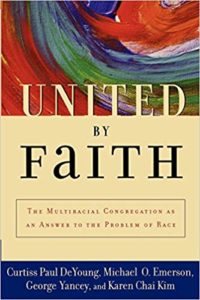 United by Faith answers Divided by Faith—intentionally so; it’s framed as a companion volume.

The problem? Divided by Faith discusses evangelical religion and the problem of race. As Martin Luther King, Jr. famously said, “the most segregated hour of Christian America is eleven o’clock on Sunday morning.”

The main thrust of the book is this statement: Christian congregations, when possible, should be multiracial.

Why would they make that argument?

They start with Jesus’ life and the way he engaged in table fellowship across gender, race, and socioeconomic lines. In Mark 11:17, Jesus says about the Temple, “My house will be a house of prayer for all nations.”

In the early church, this plays out in multiracial congregations in Jerusalem, Judea and Samaria, and then to the ends of the earth (Acts 1:8). When Paul arrived in a new area, his strategy was to preach first to Jews and then to Gentiles—and then all the converts formed one congregation.

But from 1600-1940 in the United States, that was not the case. Largely because of racism, churches were segregated. Starting in the 1940s, United by Faith explores the emergence of multiracial congregations.

After exploring arguments for homogeneous congregations, the authors turn to the argument for multiracial congregations. They argue that this was God’s design from the beginning, and that God’s character is so rich and beautiful that no single culture can capture this richness. The multiracial church asks us to be other-centered and to determine which parts of our Christianity are cultural and which parts are biblical. Both emphases embody Christian maturity.

How would you describe Redeemer?