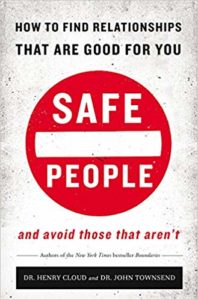 But what are healthy relationships, and how do we find them?

Cloud and Townsend, the co-authors of Boundaries, answer that question in Safe People.

They start by defining unsafe people, who generally fall into three categories: the abandoners, the critics, and the irresponsibles. Here’s a partial list of the twenty traits of unsafe people.

Personal traits (who we are) of unsafe people:

Interpersonal traits (how we connect) of unsafe people:

We may choose unsafe relationships for a variety of reasons, including: isolation, fear of confrontation, romanticizing, rescuing, and familiarity, among others.

Against the backdrop of unsafe people, Cloud and Townsend use Jesus as the ultimate example of a safe person because he embodies dwelling (connection), grace, and truth.

They say churches—as a whole—can be safe or unsafe. A safe church looks like this:

How do we pick healthy friendships? Several qualities are important:

But it’s not just about finding safe people. More importantly, it’s about becoming a safe person.

How do we become a safe person? By practicing these six steps:

And by asking these two questions to your safe people:

(Note: These lists are partial, and often direct quotes.)